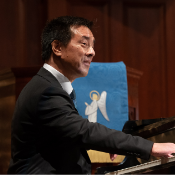 Principal Accompanist Dr. Alan Ngim, is Associate Professor of Music and Director of the Piano and Chamber Music Program at the Wolfson Campus of Miami Dade College. A frequent performer of contemporary music, Ngim has received positive reviews for his performances and has appeared on television and radio. Dr. Ngim earned his doctorate in piano accompanying and chamber music from the University of Miami in 1997, where he was awarded a University Fellowship. He holds bachelor degrees in both music and computer science from the University of California at Santa Barbara, and a master’s degree in piano performance and pedagogy from Northwestern University.